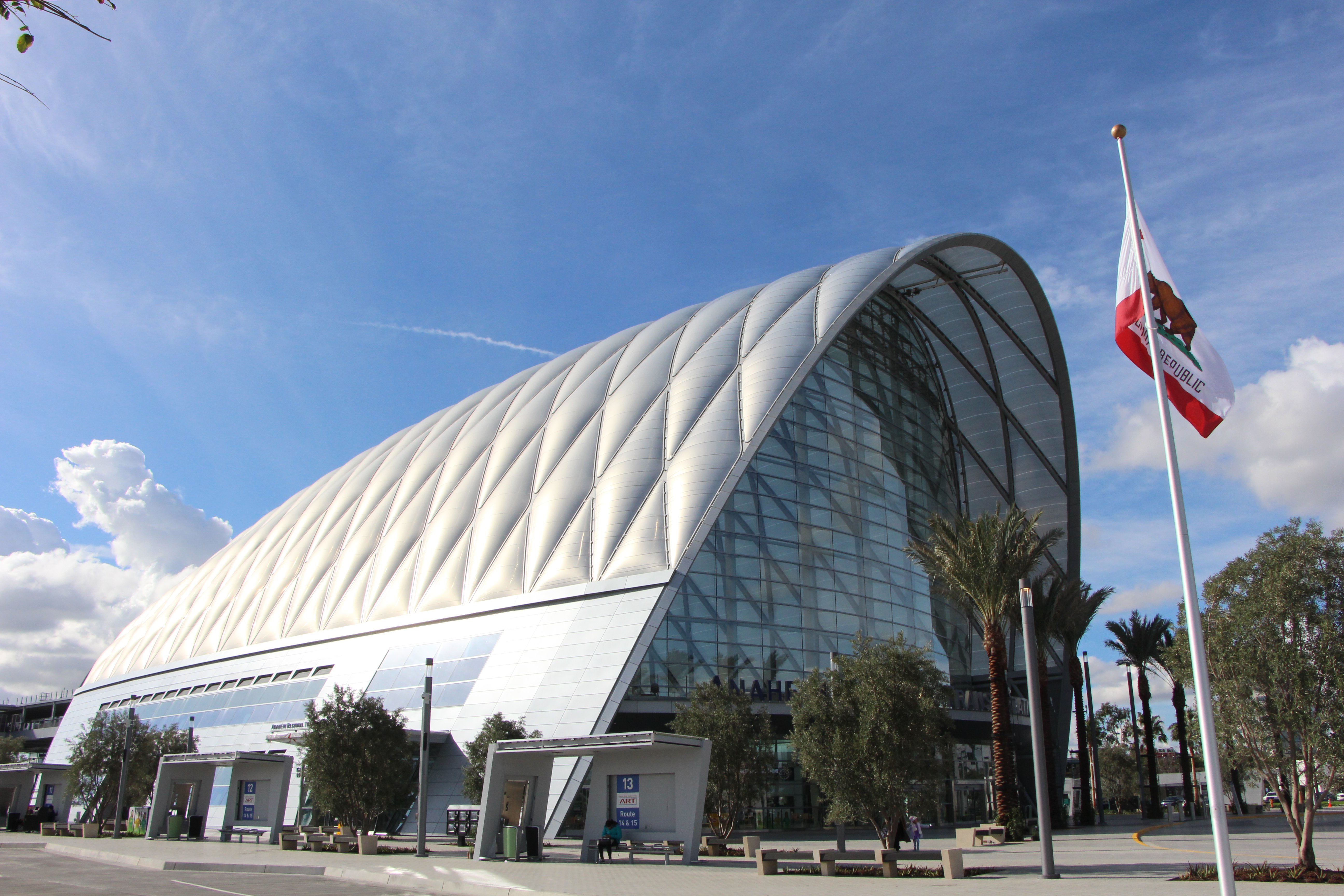 Hailed as “a new era of public transit,” the 120-foot-tall Anaheim Regional Transportation Intermodal Center (ARTIC) is redefining the experience of more than three million people who are expected to annually use rail services and intercity bus systems in southern California.

“We need to grow train use in order to reduce the traffic on our freeways,” explained Natalie Meeks, director of public works for the City of Anaheim, in an interview with the Los Angeles Daily News. “This will be a transformative move for Southern Californians to embrace public transportation.”

Designed to mimic the high ceilings of the original Penn Station in New York City, ARTIC is “Orange County’s Union Station,” Meeks told the Daily News. “This whole facility is a new concept for Southern California and a new way to look at transit—it puts a new face on mass transit.”

Sustainability was a major consideration for the Los Angeles office of HOK, which set out to qualify the transit center for Leadership in Energy and Environmental Design (LEED) Platinum certification. “The project is the first LEED Platinum certified transit station in the world,” according to HOK Vice President and Senior Principal Kazem Toossi, AIA, LEED Green Associate. “The building was designed with advance mechanical systems to optimize energy efficiency, while reducing water usage, solid waste, and carbon emissions.”

Among the innovative technologies used is the roof structure composed of 200,000 square feet of ethylene tetrafluoroethylene (ETFE) pillows, forming a transparent, highly insulating enclosure system for the terminal. “The use of ETFE allowed the interior space to be very vibrant in different natural lighting conditions as well as at night time when the LED lights at each pillow emphasize the simple vaulted shell of the structure from its surroundings,” Toossi observed. “The project represents the largest ETFE application in North America.”

“Because of the simple and strong form of the interior exposed steel diagrid shell, we needed to pay special attention to detailing of the steel moment connection so it appeared seamless, and the pure form and geometry were not compromised,” Toossi emphasized. “The ETFE pillows are silver, so we wanted a coating with a neutral color that accentuated the arches but at the same time married the rest of the ETFE structure.”

The diagrid structural system required both shop and field applications of a Tnemec three-coat system with the necessary long-term performance and aesthetics. “We found that coating system to be the most durable and ultraviolet (UV) light stable material to use on the diagrid shell and interior steel,” Toossi acknowledged.

All specified coatings also conformed to VOC limits under the South Coast Air Quality Management District (SCAQMD), which has the most restrictive VOC coatings regulations in the U.S.

At the construction site, welds were prepared in accordance with SSPC-SP 11 Power Tool Cleaning to Bare Metal, and primed with 94-H2O Hydro-Zinc, a single component aromatic urethane coating, followed by an intermediate coat of L69 and a finish coat of Series 750.

The coating system for the terminal’s structural steel was shop-applied by Techno West, Inc., of Anaheim, California, while touch up of the estimated 1.5 miles of welds on the assembled structure was performed by Techno Coatings, which is also located in Anaheim.

Several welded mockup sequences were used to demonstrate the surface preparation and performance of the specified coating system prior to its final approval, according to Chris Radovich, NACE, SSPC, plant manager for Techno West. The mockups were six- to eight-foot-tall fabricated cross members that were representative of the actual size and scope of the work.

“Most of the shop-applied coatings were spray-applied, while all of the welded field connections were applied by brush and roller,” Radovich noted. “We had to provide special attention to those welded connections to blend the rolled-on finish with spray-on finish so they are unnoticeable.”

The mockups also assessed whether the coating could replicate the same color from one batch to another, according to Tnemec representative Tony Hobbs. “Every cross member on the structure is a weld, so there are hundreds of welds that required touch up,” Hobbs observed. “If we couldn’t replicate the same color from batch to batch, all those welds would stand out like a sore thumb. So quality control was a major consideration.”

Radovich estimated the overall project took approximately one year to complete, which included the main superstructure, the glazing package at the main entrance, as well as an approach bridge and all the stair towers. A six-man crew was responsible for touch-up work on the welded connections, while another crew of six men applied field coatings to the ancillary items on the structure.

“The majority of the work on the superstructure was well over 100 feet in the air and most of it was inaccessible by boom lifts or scaffolding,” Radovich recalled. “The job required highly trained and specially equipped painters who climbed up from the bottom of the superstructure to the top and worked their way down using climbing gear attached to connection posts on the structure’s exterior.”

ARTIC has been recognized with numerous awards including the American Institute of Architects Technology Architectural Practice Building Information Model, the Orange County Chapter’s Eco-City Award, the American Institute of Steel Construction’s Innovative Design in Engineering and Architecture with Structural Steel Award, the American Public Works Association’s Project of the Year Over $75 Million, the Orange County Branch of the American Society of Civil Engineers 2014 Project Awards, and the Superior Performance in Real Estate (SPIRE) Project of the Year.

A versatile low VOC epoxy for protection and finishing of steel and concrete. It has excellent resistance to abrasion and is suitable for immersion as well as chemical contact exposure. Contact [...]