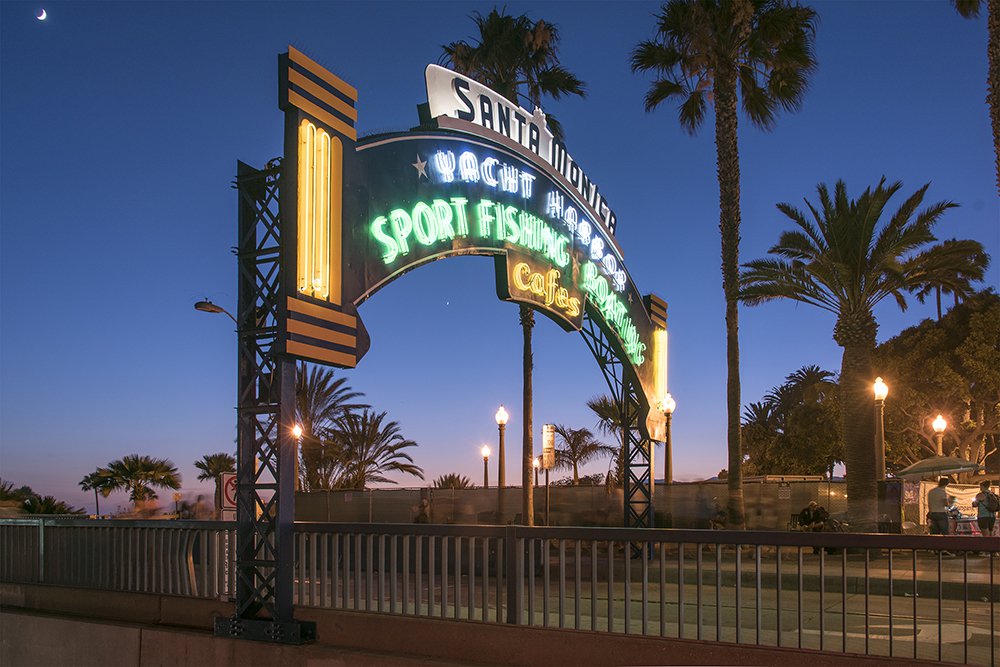 From its dedication in 1909, to last year’s celebration of the 90th anniversary of Route 66, the Santa Monica Pier has been among southern California’s most popular attractions and historical landmarks.

“Currently, more than 3 million people visit the Pier each year,” the Santa Monica Landmark Properties website reported. “The Santa Monica Pier continues its legacy as California’s oldest pleasure pier and is the only pier with an amusement park on the West Coast.”

The appearance of the iconic pier and entrance sign in commercials, print advertisements, TV and movie productions has been a source of community pride for the City of Santa Monica for decades. In the early 1970s, however, community support for the Pier was tested when the deteriorating structure was considered obsolete and “standing in the way of redevelopment,” according to an article posted on the Santa Monica Conservancy website.

“The catalyst for the movement to preserve Santa Monica’s heritage was a 1973 proposal to demolish the Santa Monica Pier,” the Conservancy recalled. “A grassroots movement to ‘Save the Pier’ successfully convinced the City Council to change course. As the Centennial approached in 1975, the Council created a Historical Site Committee to develop a process for preserving historic sites.”

In 1976, the city adopted a Landmarks and Historic District Ordinance with the power to designate “Structures of Merit and Landmarks.” That same year, the Pier was designated a City of Santa Monica Landmark.

Major restoration of the Santa Monica Pier has included construction of a new concrete substructure in 1988, as well as the development of retail, food and entertainment venues.

Ongoing maintenance of the Pier is provided by the city’s Office of Pier Management (OPM), which in recent years has used fluoropolymer coatings from Tnemec to protect railings from exposure to salt water and ultraviolet (UV) light, in addition to scratches from skateboards and fishing gear.

“The Santa Monica pier is a very abusive environment,” explained Dustin Kaatz of TPC Consultants, Inc. “Since they started using fluoropolymer coatings systems they have been able to significantly extend the maintenance cycle on their coating projects.”

Tnemec coating systems were also used last year on the Santa Monica Pier Sign, which is also a City of Santa Monica Designated Historic Landmark. Spanning the width of the two-lane Colorado Avenue Viaduct, the sign was commissioned in 1941 by the Santa Monica Business Men’s Association at a cost of $2,000.

“At the time the Sign was erected, the major attractions on the Pier were the yacht harbor, sport fishing, and boating,” noted the City Landmark Assessment and Evaluation Report published in 2011. “The Santa Monica Business Men’s Association wanted the sign to advertise the outstanding amenities and activities located on the Pier, thus the pier sign reads ‘Santa Monica Yacht Harbor – Sport Fishing – Boating – Cafes.’”

The Pier sign represents the type and style of neon signs constructed during the early 1940s, the Landmark Report explained.

“The Sign is unique in and of itself, and there are no other extant examples of its type and style, an arched neon Streamline Moderne sign, within the City of Santa Monica, the broader Los Angeles metropolitan area or other Southern California beach cities,” the Landmark Report stated.

The city wanted the historical sign to look its best in preparation for the opening of a new downtown rail line and for the 90th anniversary of Route 66, which ends at Santa Monica Pier.

“The colors on the historic sign were starting to fade and it was becoming an eyesore,” Kaatz recalled. “Using historical documents and old photos, we determined the sign’s original colors, which Tnemec was able to match.”

Working from a boom lift, the front of the sign was hand- and power-tool cleaned and primed with a low volatile organic compound (VOC) epoxy. A low-VOC fluoropolymer finish coat, Series 1071V Fluoronar, provided the sign with outstanding color and gloss retention.

“The applicators had to stencil and hand-paint around the sign’s neon lighting, as well as deal with all the vehicle and pedestrian traffic along the street that passes under it,” Kaatz added. “City workers were also racing a tight deadline to complete the project in time for the opening of the new rail line to the Pier.”

Truss work behind the sign was power washed and overcoated with Series 118 Uni-Bond Mastic, a waterborne acrylic elastomeric coating formulated for exceptional adhesion and corrosion resistance over minimally prepared aged coating systems. A second coat of Series 750 UVX, an advanced technology polycarbamide finish coating, was applied over the Series 118 for superior color and gloss retention.

Working with the Pier Corporation, the OPM oversees planning, maintenance and major capital improvement projects, such as replacement of the pier bridge and decking. Citing the diverse entertainment options available on the Pier, ranging from street performers and artists to the classic wood carousel where rides are less than a dollar, the OPM website observed, “The Pier today is a popular recreational destination, as well as a vibrant reminder of the past.”