On June 6, 1944, Allied troops began landing troops on the beaches of Normandy shortly after midnight. The troops had to deal with less-than ideal weather conditions – the storm forced a 24-hour delay in the operations – and a range of lethal obstacles, including heavy gunfire from nearby cliffs, landmines buried in the sand, and barbed wire.

The landings took place across a 50-mile stretch of beaches, split up into five sectors – Omaha, Utah, Juno, Gold, and Sword. The Nazi opposition was so brutal that none of the Allies’ goals were achieved in the first day. It took six days to link all five beaches and another month and a half before major objectives, such as the capture of Caen, were able to occur. The bravery and sacrifices of so many troops directly led to the eventual defeat of the Third Reich.

A lot of work has gone into preserving and honoring the memories of what happened on those beaches. There is an assortment of different monuments, memorials at important strongpoints, multiple dedicated museums, graveyards of those who fought there. The Pegasus Bridge, which had been a target of the British 6th airborne in preparation for the operation, has even been relocated to a museum. 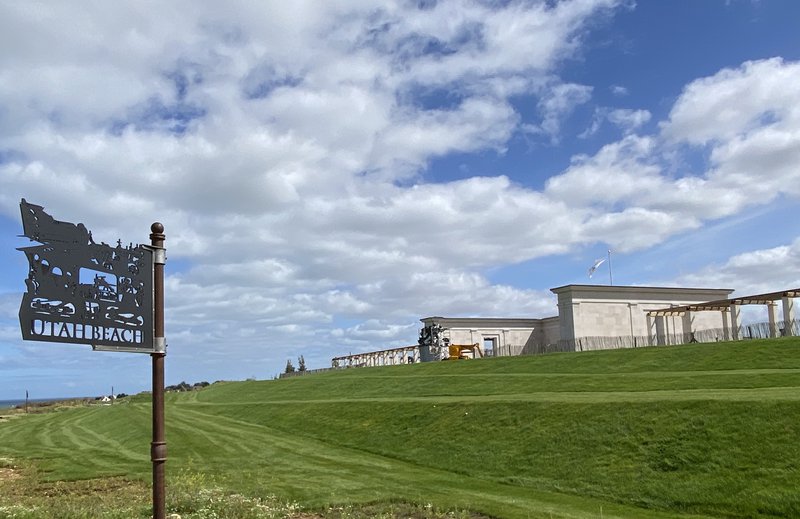 To memorialize the roughly 22,000 British soldiers who were lost in the invasions and their aftermath, the Normandy Memorial Trust has funded the creation of the British Normandy Memorial. Upon completion in early 2021, it will bear column upon column inscribed with the names of the British troops who died during D-Day and related campaigns.

The compilation of all of the names of those who died had never been done before. Jane Furlong, previously with the Imperial War Museums, led research across the UK National Archives as well as international and family records in order to create the most complete listing possible of the individuals who sacrificed themselves for the cause. A set of bronze sculptures by British artist David Williams-Ellis will complete the monument.

The memorial stands on a hillside above Gold Beach. From the hilltop, it’s possible to see the blocky concrete remnants of the Mulberry harbor at Arromanches. These Mulberry harbors allowed for the unloading of vehicles, troops and supplies until a port could be captured. The harbor at Gold Beach was used continually for ten months after D-Day; 2.5 million soldiers crossed it during that time.

It can be difficult for anyone who isn’t an obsessive history buff to go to an actual beach in Normandy and know what happened in that place – and 50 miles of beachfront that isn’t clearly marked doesn’t help someone figure where their father or grandfather came ashore.

This is why Charles Bergen Studios was tapped to create signs for the beaches. Bergen is an architect and artist with decades of architectural experience, which contributes to his understanding of the ways in which a particular piece relates to its location. His extensive knowledge and flair for simple, clean storytelling made his studio an excellent choice for this project. 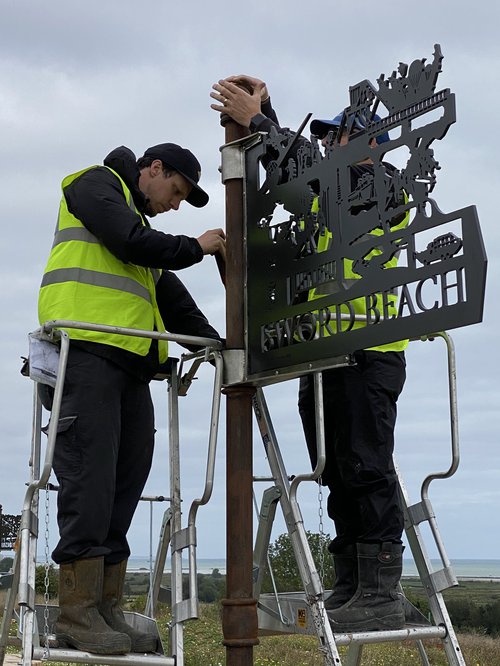 The British Normandy Memorial Waymarker signs are designed to direct visitors to the five invasion beaches and memorialize the story of D-Day. Each sign is a work of art, incorporating visual storytelling techniques and fabricated in the same bronze as the statues in front of the main memorial.

The signs feature the rolling curves and sharp jags of the local coastal landscape. Careful cuts in the aluminum create layers of negative space below, openings that surround stark, careful images of soldiers and tanks pouring onto the beach from the marine vessels who transported them.

A row of symbols along the inside edge of the signs represents the units who fought in each location. A final bottom two rows explain the context and state which beach of the Normandy invasion visitors are viewing.

Creation and Coating of the Waymarkers

Careful research into the photographic records of the event informed the images that were incorporated into the signs. The research library staff at the Canadian War Museum in Ottawa, Ontario, Canada, provided a selection of images. Further images were curated by Kaitlyn Crain Enriquez of the Still Picture Reference Team at the National Archives. The photographs provided a compelling visual record that the artists were able to draw upon to provide a sense of realism and historical accuracy to the final signage. Colonel Keith D. Dickson, a retired Special Forces Officer in the U.S. Army Reserves, provided further historical background.

The five signs – one for each of the invasion beachfronts – were crafted out of one meter by one-half meter sheets of aluminum. Once the designs for each were finalized, they were rendered into digital files to guide the waterjet cutting. Files were created by the team of architects and artists at Charles Bergen Studios. Designs for the stainless-steel brackets were provided by JWE Consulting and S.E. Consultants, Inc. 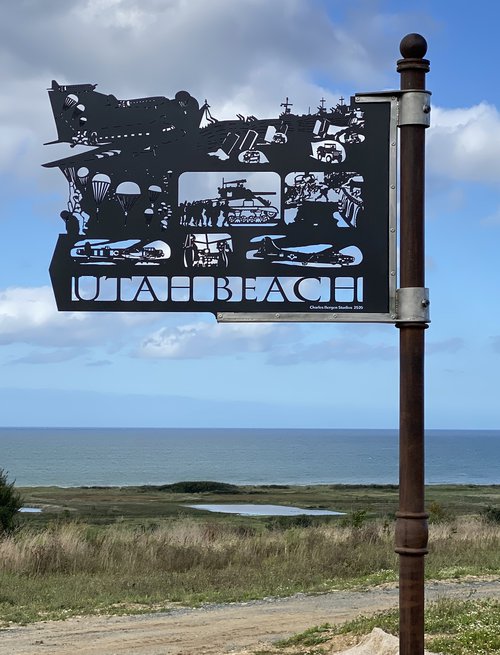 To ensure that the waymarker signs were protected from the elements, Tnemec donated high-performance coatings for the project, including the bronze-colored fluoropolymer finish coat, Series 1078 Fluoronar Metallic. Series 1078 is an advanced thermoset solution fluoropolymer that creates an ultra-durable metallic finish. The coating is able to stand up to the demands of a maritime environment while providing outstanding gloss and color retention.

The waymarkers were fabricated and coated in Washington, D.C., before being transported to France for installation in May 2020. The site is currently closed to the public while landscaping and other final projects are finished. The official opening of the British Normandy Memorial is planned for June 2021.