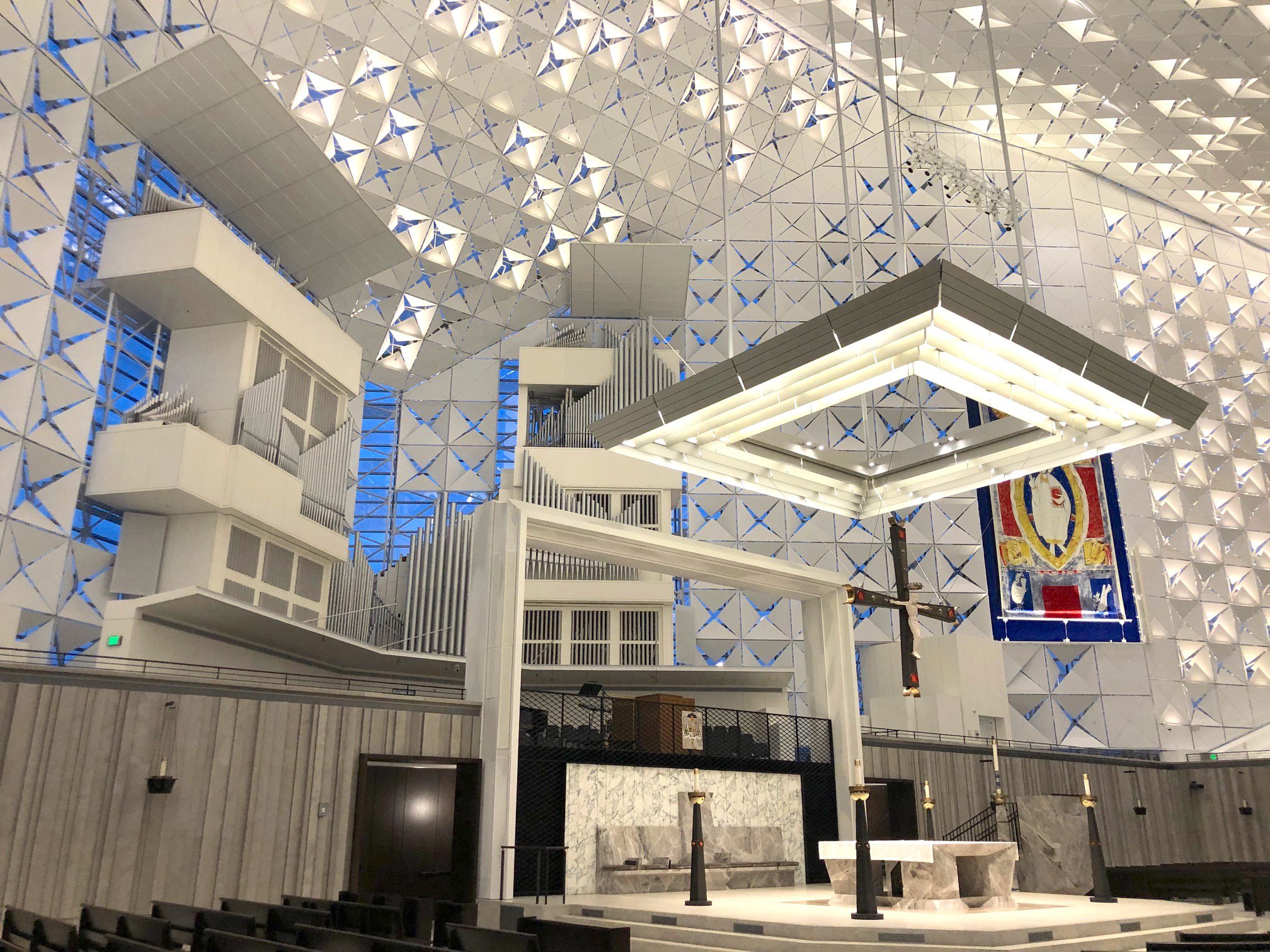 Renovations are at their best when they not only fix structural problems, but also work to breathe new life into an existing space. The $72 million renovation of the Crystal Cathedral of Orange County, California, turned this massive glass structure into the hub of activity for the Archdiocese of Orange County. The renovation involved everything from cleaning and repairing the massive trussing structure and roughly 11,000 windows to reimagining the interior in a way that would make it compliant with the needs of a traditional Catholic mass.

The Crystal Cathedral was originally designed by postmodern American architect Philip Johnson. Construction of the original building began in 1977 and took more than three years to complete. It cost $18 million, standing at 120 feet tall, 207 feet wide and 400 feet long, with seating for nearly 3,000. At the time of its completion, it was touted as the largest glass building in the world. 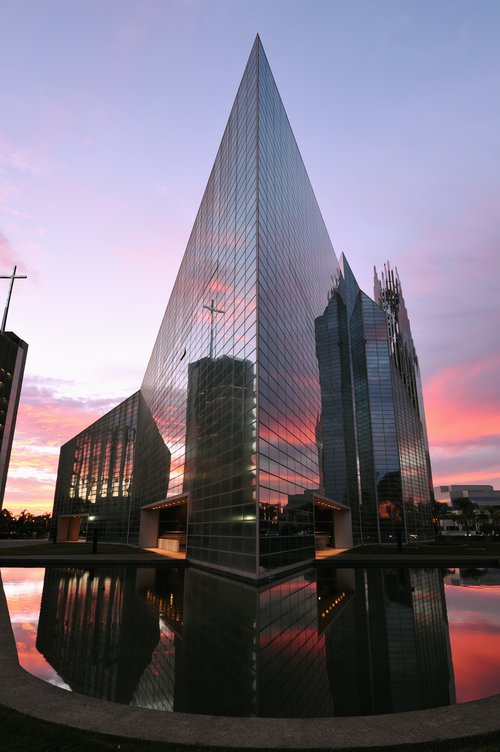 The goal of the recently completed renovation was to reimagine the interior in a way that would make it suitable for Catholic worship while maintaining as much of the original vision for the design of the building as possible. The iconic exterior was given significant repairs but left otherwise as untouched as possible.

This massive project involved nearly every portion of the cathedral. One of the biggest challenges happened early in the renovation process with the repair of the silicon that keeps each of the nearly 11,000 panes of glass attached to the outer structure of the building.

The silicon had originally been placed to create a shear wall, allowing the individual panes of glass to move back and forth within their aluminum frames. The movement and gluing of panes was a design element intended to help the building withstand large earthquakes – up to a magnitude 8.0 – in an area prone to them. The repairs were necessary to protect the glass from breakage and to seal the interior against humidity and other elements.

The main interior structure of the building was created through a steel space frame featuring a rigid octet truss. This structure, named after the words octahedral and tetrahedral, looks like a prism, or a series or pyramids with square bases. A three-dimensional trussing system, it was chosen for its beauty as well as for its load bearing strength.

As a major part of the early restoration of the cathedral, the steel of the truss needed cleaning and repainting to ensure its continued durability. According to local Tnemec representative, Tony Hobbs, the owner reached out for a recommendation. 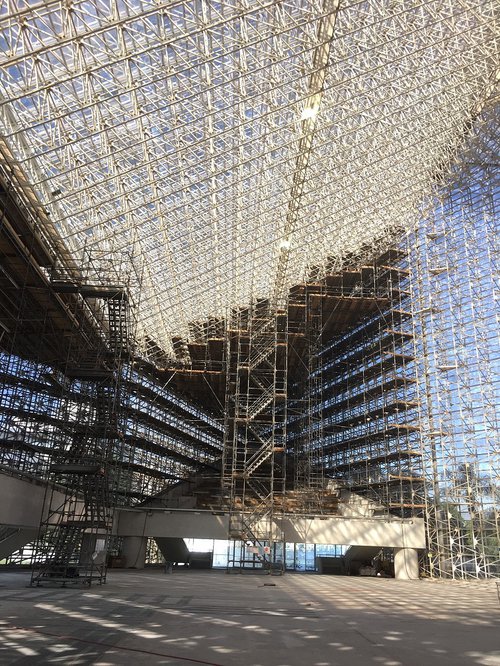 “Tnemec products were eventually chosen because of their reliability and ease of use,” noted Hobbs. “After test patches were completed to confirm adhesion, the project team saw the benefits of using these coatings.”

“The contractor used an extensive scaffolding system to complete the project, dedicating a lot of time to the details of the structural frame,” added Hobbs. “And, after the applicator finished, the Cathedral was really transformed.”

Once reinstalled, the glass panes were fitted with over 11,000 quatrefoils as a shading system to help improve control of the various stresses created by the sunlight and solar heat transmission inherent in an all-glass building. They have a softening effect on the light, taking it down from nearly blinding to something more ethereal in feeling. The quatrefoils allow for lighting adjustment, improve internal environmental controls and create a more stable environment for the massive Hazel Wright organ. Most importantly for the worship purposes of the cathedral, the quatrefoils will help the newly created altar become the central focus of worship services.

The Hazel Wright organ, one of the largest pipe organs in the world and the fourth largest church organ overall, was removed and shipped to Italy for extensive repair and refurbishment during the Cathedral renovations. Reinstallation of the organ is now being completed, and the newly refurbished organ will be dedicated to the building with a concert in May 2020. 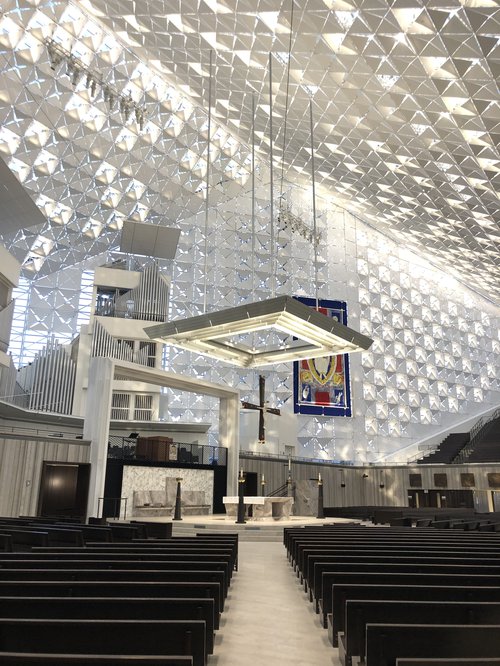 Another main element of the internal redesign involved shifting the predella – the altar platform – toward the organ. The three entrances were all reconfigured. This set of changes allowed for reorganization of seating from an antiphonal to a radial arrangement, which in turn has enabled seating of several hundred additional people and prevented any potential need to remove the balconies. The radial seating also creates improved sight lines for congregants, giving them a better view of the altar and suspended crucifix.

The altar complex was completely reimagined in a necessary step to highlight it as the center of Mass services. The predella contains a central altar with a marble overlay and overhanging metallic crucifix and baldachin. The ambo was erected to the right and elevated by the predella to ensure good visibility of the speakers during sermons and readings.

RECHRISTENED AS THE CHRIST CATHEDRAL

The final design plans came in at a significant savings over the original plans and were completed in far less time than expected. There is another phase of renovation planned in the future to work on the undercroft, columbarium, Bishop’s Crypt and other spaces necessary to a fully functional cathedral for one of the largest dioceses in the United States.

The cathedral was rechristened as Christ Cathedral and reopened with a dedication in July 2019. The total renovation took two years and $72.3 million. It now holds 11 Masses each weekend in four languages: English, Spanish, Vietnamese and Mandarin. In addition to the regular Mass schedule, it also holds special Masses for events such as ordinations.