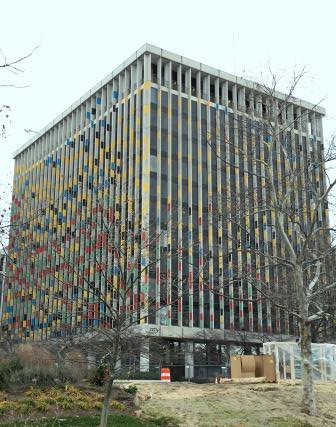 A former office building once occupied by federal employees is enjoying a renaissance as an innovative residential development designed with young entrepreneurs and tech workers in mind.

Located in Crystal City, Virginia, in the Washington, D.C. metropolitan area, the Crystal Plaza 6 building was obsolete by modern office standards, according to a news release announcing the project’s approval by the Arlington County Board. In the announcement, the project was described as “a model for adaptive reuse of an outdated building.”

Under the conversion plan, the building was completely “gutted” and repurposed into residential apartments with shared amenities, as well as office and retail space.

“The 12-story building will have 252 units, many of them 360 square feet or less, and several shared two-story ‘neighborhoods’ with expansive common areas,” the news release explained. “The neighborhoods will be connected by staircases and feature commercial-grade kitchens, dining areas and shared community spaces.”

The “micro-unit” apartment concept, which was new to the region, was developed by Vornado Realty Trust in partnership with WeWork Companies Inc., a provider of shared office space. Each furnished unit features a bathroom, a kitchenette with small refrigerator, microwave and sink.

Crystal Plaza 6 was WeWork’s first residential building to offer shared amenities and the opportunity for residents to collaborate. WeWork holds a 20-year lease on the building.

“The idea is that residents – younger tech workers, mostly – would be more interested in hanging out together outside or in common areas than in their individual apartments,” stated an article posted on the online news site ARLnow.com.

In addition to the common areas such as gardens, lounges and dining areas, the project includes streetscaping, sidewalk improvements, and an experiential exterior color application that changes from one vantage point to another.

“In a city full of bare masonry and stone, a wild color scheme was chosen,” explained Travis Gold of Mid-Atlantic Coatings. “There are 16 colors on the building’s façade, which appears to be red- and orange-colored from one direction and green and blue from another as you drive around it

Tnemec’s architectural sales department in Kansas City, Missouri, was instrumental in finalizing the color selection during the early planning stages.

A test patch applied to a corner of the building demonstrated the stability of the recommended coating system on the structure’s architectural “fins” made of rough masonry panels.

The panels were power-washed at 1,500 psi to remove loose particles prior to being filled with Series 1254 EpoxoBlock WB, a water-based epoxy that can be topcoated with water- and solvent-based coatings. The low-odor, low volatile organic compound (VOC) primer conforms to the LEED rating system for Existing Buildings (EB).

Nearly 300 gallons of Series 1071 Fluoronar, a high-solids fluoropolymer finish coating, were brush- and roller-applied as the finish coat by crews working from swing stages.

“Fluoronar was the easy choice as the finish coat due to its ease of application, long life cycle, and its color and gloss retention,” Gold observed. “This was important due to the vibrancy of the chosen colors.”

Longevity of the coating system was a major consideration given the difficulty of applying the complex color scheme, which required extensive masking around the architectural fins, as well as extra time to mix small batches of material.

“They needed a coating that would last a long time because it would not be feasible to recoat the building given the complexity of the project,” Gold recalled. “It was a lot of work, but contractor did an excellent job recreating the owner’s rendering.”

Crystal Plaza 6 is part of a six-building complex that was developed during the 1960s.