5 Things to Know Before You Overcoat

Is your aged coating system eligible to overcoat? Learn how to tell before it's too late.

The success or failure of an overcoat system depends on several variables, including the condition of the existing coating, the geographic location of the structure, the surface preparation and the type of coating system selected. Whether or not overcoating is a feasible alternative to complete removal and repainting depends a great deal on the condition of the existing paint system. The amount of corrosion present, number of coats, adhesion to the substrate, adhesion between coats and geographic location (exposure conditions) are all that need to be considered before a speciﬁer can make an overcoat or complete removal decision.

1. Corrosion of the Substrate 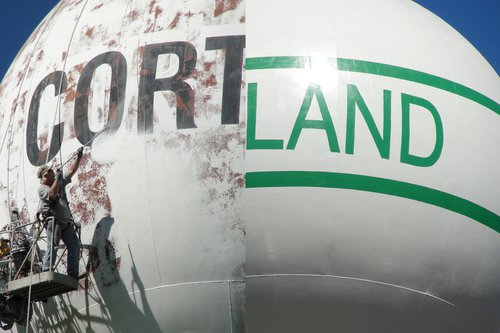 One of the criteria used to determine if an existing paint system can be effectively overcoated is the extent of corrosion that has occurred. This can be evaluated by visual assessment using ASTM D 610 Evaluating Degree of Rusting on Painted Steel Surfaces.

ASTM D 610 contains photographic reference standards that illustrate the degree of rusting on a numerical scale from 0 to 10 where Rust Grade 10 indicates less than or equal to 0.01 % rust and Rust Grade 1 represents greater than 50.0% rust. In other words, a higher rating indicates less rust.

Certain tests are required to determine total ﬁlm thickness and previous coats. Conduct the following tests at a minimum of 3 locations (3 trials at each location) and record results on the appropriate form. Draw a diagram of the structure on a separate piece of paper and mark the locations where tests were conducted.

Large structures such as bridges should be divided into zones and a minimum of 3 locations tested within each zone. Use a separate form for recording zone data. 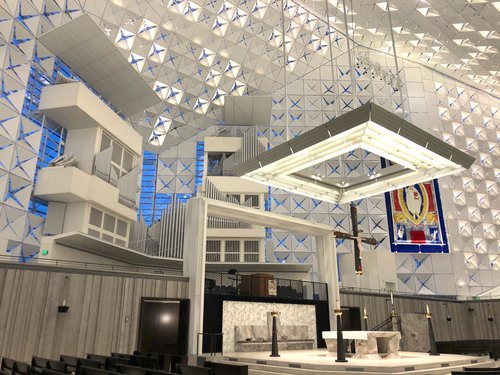 3. Adhesion of the Existing System

Before checking how well the coating system is adhered to the substrate, visually inspect the ﬁlm for defects such as delamination, cracking and blistering. List any signiﬁcant ﬁlm defects that are observed. Existing coatings with extensive delamination or cracking should NOT be overcoated. If blisters are present, report blister size and frequency in accordance with ASTM D 714 Evaluating Degree of Blistering of Paints.

Check adhesion at the same locations (3 trials at each location) where dry ﬁlm thickness readings were taken. Use the following adhesion test methods:

X Scribe and Tape Test Conduct this test in accordance with ASTM D 3359 Standard Test Methods for Measuring Adhesion by Tape Test, Method A. Adhesion is rated on a scale of 0 to 5 as outlined in the ASTM test method. No removal is rated as 5A and removal beyond the area of the ‘’X’’ is rated as 0A.

Knife Adhesion Probe at the coating with the point of a knife blade in an attempt to delaminate the coating system between coats or from the substrate. Rate “knife adhesion” as poor, fair, good, or excellent. 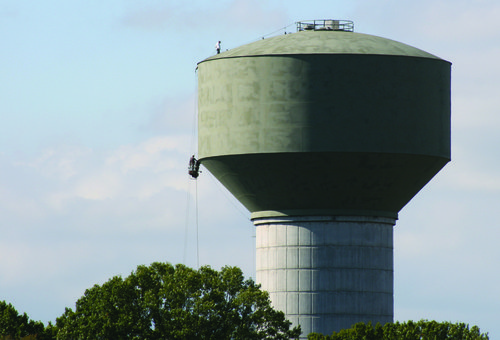 Adding additional coats of paint to an old paint system will always increase the degree of cohesive stress. The risk factor question is usually not if the new system will adhere to the properly prepared surface of the old, it’s whether or not the old system has good enough ﬁlm integrity, adhesion between coats and to the substrate to support an overcoat system without literally falling apart.

Before selecting candidate overcoat system, keep in mind that cohesive stress exerted on the existing system will vary with generic type. Non-ﬂexible conventional 2-component epoxies or aliphatic urethanes will develop more cohesive stress upon curing than more ﬂexible coatings such as acrylic emulsions or medium to long oil alkyds.

Also, regardless of generic type overcoat system, the higher the ﬁlm thickness the greater the cohesive stress on the existing system. For example, application of a system at 12.0 mils total DFT to an old paint system possessing marginal adhesion would most likely lead to a delamination disaster. Enough cohesive stress will be developed that the old system will be literally pulled apart at its weakest adhesion link (between coats or from the substrate).

Geographic location (exposure condition) also plays a role in the selection of an appropriate overcoat system. Paint systems in the northern states undergo more stress because of freeze/thaw cycling. Flexible, low cohesive stress overcoat systems, therefore, become even more important in those areas of the country that are subject to frequent freeze/thaw cycles during winter months.

Still have some questions?

It's important to understand your substrate and your surroundings when starting a potential overcoat project. If you need more help, or would like a copy of our overcoating packet – complete with charts and forms for the overcoat process – contact your local Tnemec representative today. Tnemec representatives can even come out to your job site and help you determine whether or not your structure can handle an overcoat system.

Want to Earn Some CEUs?

Check out all of Tnemec's coating courses, available on demand and in person.